The term "eating disorders" refers to a group of complex mental health conditions that can have serious consequences for one's health and social functioning.

Eating disorders can cause emotional distress as well as serious medical complications. In addition, they have the highest mortality rate of any mental disorder.

Most eating disorders involve obsessing over your weight, body shape, and food, which leads to dangerous eating habits. These behaviours can significantly impact your body's ability to obtain adequate nutrition. Eating disorders can harm the heart, digestive system, bones, teeth, and mouth, as well as lead to other diseases.

In regards to feeding and eating disorders, there are several types:

Eating disorders commonly occur together with other mental illnesses, mainly anxiety disorders, which include:

Eating disorders can affect every part of the body, causing problems such as;

Medical doctors and mental health specialists, such as psychiatrists and psychologists, can diagnose eating disorders. Often, a pediatrician or primary care doctor will diagnose an eating disorder after noticing symptoms during a regular check-up.

Although there is no specific laboratory test to identify eating disorders, your doctor can diagnose you using a combination of physical and psychological examinations as well as lab testing, such as:

•    A physical exam, during which your height, weight, and vital signs will be noted.
•    Psychological evaluation, which includes personal questions about your eating behaviors, binging, purging, exercise habits, and body image
•    A complete blood count, liver, kidney, and thyroid function tests, urinalysis, X-ray, and an electrocardiogram are among the lab procedures that may be performed. 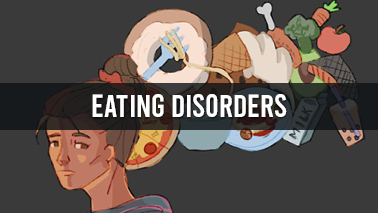