Addictive disorders, such as substance abuse and dependence, are general conditions characterised by excessive consumption of alcohol and/or drugs. Addiction is a chronic and recurring disorder that develops over time.

Substance-related addiction illnesses are referred to by three different types.

It is an addictive disorder that describes a pattern of substance (usually drug or alcohol) use that leads to significant problems or distress, such as failure to attend school, substance use in potentially dangerous situations (such as driving a car), substance-related legal issues, or continued substance use that interferes with friendships and/or family relationships. The most frequently harmed legal drug is alcohol.

Substance dependency is an addictive condition characterised by the continuous use of drugs or alcohol despite the development of severe issues associated to their usage. Signs include an increased tolerance—that is, the need for more of the substance to achieve the desired effect; withdrawal symptoms with reduced use; unsuccessful attempts to reduce use; increased time spent in activities to obtain the substance; withdrawal from social and recreational activities; and continued use of the substance despite awareness of the physical or psychologic consequences.

Chemical dependence is an addiction disorder that defines a person's inability to stop using chemicals (typically drugs or alcohol) despite the negative consequences of doing so.

The following are some of the chemicals that are commonly abused, particularly among adolescents with addiction disorders:

People suffering from addictive disorders may experience symptoms in a variety of ways. The following are some common signs and symptoms of addiction disorders:

• Regularly getting high on drugs or intoxicated
• Avoiding friends and family members
• Giving up activities they used to enjoy, such as sports or spending time with non-using friends
• Speaking a lot about consuming drugs or alcohol
• Pressuring others getting into legal difficulty
• Taking risks, such as sexual risks or driving while under the influence of a substance
• Being suspended or expelled from school or discharged from a job because of a substance-related incident
• Absent school or work due to substance use
• Feelings of depression, hopelessness, or suicidal ideation

Multiple factors contribute to addictive disorders, including genetic vulnerability, environmental stressors, social pressures, individual personality characteristics, and psychiatric problems.
Addiction disorders develop neurologically when a substance alters the way the user's brain perceives pleasure. Addictive substances damage the brain's ability to send and receive chemicals known as neurotransmitters, which are responsible for pleasure. Addictive substances can prevent nerves in the brain from receiving these neurotransmitters, indicating that the drug user relies on the drug for pleasure rather than his or her natural brain chemicals. 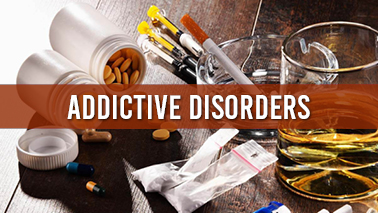